Remember your adolescent or teen years when people were obsessed with having a special someone to call their valentine? Whether it was getting a paper valentine (preferably with candy taped to it) in your handmade cardboard Valentine’s Day box, being serenaded in homeroom, or being surprised by a bouquet of flowers, I sure know that my friends and I were no exception to these hopes. Perhaps Valentine’s Day generally ended with some disappointment because your crush did nada. But usually it was ok because you got chocolate. Lots of chocolate. And chocolate makes everything better. 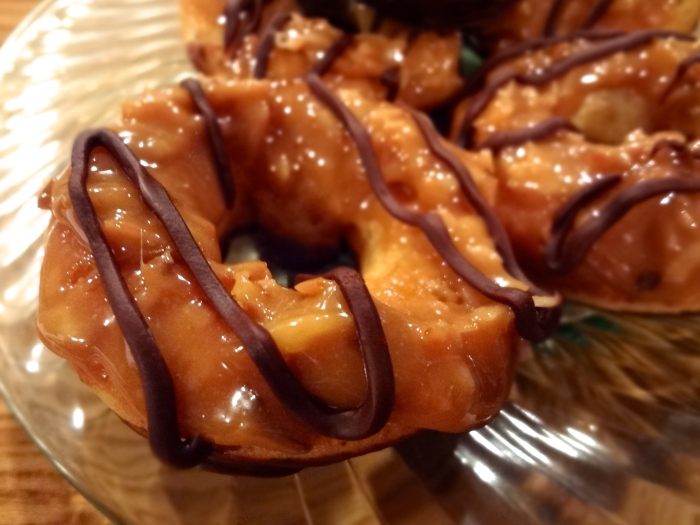 I like to think that I grew up a lot since then (although my brother may contest this after he caught me listening to the Frozen soundtrack on repeat), and I realized that I actually like living the single life. For now at least. Sure, my friends and I are doing the “single girls” thing tomorrow night by going out to dinner and then eating lots of Ben and Jerry’s and chocolate, but it’s because we’re best friends and that’s what girls do anyways, right?

Anyways, to these donuts. Take every possible positive adjective you can think of, add a lot of exclamation points at the end, and that probably sums up my description of these. Sur la Table was having a sale, which naturally meant I had to pick up a donut pan. Because a cheap donut pan + homemade donuts = happiness. After baking some great and not-so-great donut recipes, I came across this Samoa Baked Donuts recipe from one of my favorite blogs, Top with Cinnamon. Who doesn’t love Girl Scout cookies? Ergo, who wouldn’t love these donuts? (I know, an example of my flawless logic skills at work).

Imagine eating Samoas, and that is what these donuts taste like. They also look like a Samoa, which I love. Unlike some of the donut recipes I tested out, this donut isn’t dense, overly cakey, or dry. Instead, it’s light and fluffy from the yeast added to the batter, and is pretty much everything you could ever want in a baked donut. Combined with the caramel, coconut, and chocolate, it certainly is reminiscent of Samoas. Also, because I’m a texture freak when it comes to food, I love the variety in these donuts: the soft donut and the chewiness of the coconut caramel contrasts wonderfully together, along with the chocolate drizzle and dipped bottom.

Whether you’re single or not, these donuts will a) Make your significant other fall in even more love with you, or b) Make you forget that you’re single because all you need are donuts. Specifically these donuts. Donut stop loving me, (cue the Dolly Parton song now). Anyways, puns and questionable music references aside, happy early Valentine’s Day/happy Thursday!

On a side note, today is Galentine’s Day where you celebrate your wonderful friends, à la Leslie from Parks and Recreation. So show your friends a little love today and surprise them with some donuts!

For the coconut caramel topping and chocolate:

Preheat the oven to 350 F. Grease a standard donut pan with six wells (you also could use a mini donut pan).

In a small bowl, mix together the flour, yeast, baking powder, salt, and baking soda. Set aside.

In a stand mixer, cream together the butter and sugar until light and fluffy. Then beat in the egg, vanilla, and yogurt. Add in the flour mixture in three additions, alternating with the milk. Mix just until combined.

Pour the batter into a large ziplock bag, seal it, and snip a corner off. Pipe the batter into the donut pan, making sure that each well is about 2/3 of the way full. Let rest for five minutes.

Bake the donuts for 10-15 minutes, or until puffy and golden brown. Let cool in the pan for five minutes, then remove and let cool on a rack.

Spread the coconut out in a sauté pan and toast over medium-low heat until golden brown, stirring occasionally. Make sure to watch it closely since coconut will burn fairly quickly. Set aside.

Place the caramels and milk in a small saucepan and heat over medium heat, stirring constantly, until melted. Stir in the coconut.

*Recipe adapted from Top with Cinnamon